It’s possible to be underdressed but never overdressed. Even to a shootout.

Fun (?)fact: Actor Kevin Gage, who plays Waingro in the film was imprisoned in real life for a couple of years. Naturally, all the inmates referred to him as ‘Waingro’.

Honestly, the best part of the movie.

My thoughts: I was told by a friend that I had to be in the ‘right mood’ to enjoy this film, so I waited until a Saturday night when I was in the mood for lots of murder. Unfortunately, maybe I misread my own signals because I just didn’t fall in love with Heat like I thought I would.

All the ingredients are there: a stellar cast, top notch directing, a fast moving plot. Really, I can’t think of anything else I would want more in a movie. And yet, I just didn’t really care for it. At a basic level, I failed to care about any of the characters, so when one of them evaded police or when the police got closer to catching the bad guys, I remained meh. I thoroughly enjoyed Al Pacino’s performance as Vincent Hanna but just couldn’t bring myself to really care about his character. I felt like Robert De Niro as Neil had much more depth, but if we are being honest here, the goatee really bothered me. Something about it just screamed ,’this is the 90s and don’t you forget it!’ and I didn’t. Even the music was so 90s- a cross between every heist movie from that time period and the kind of music you would find on Showtime at 2 in the morning back then. 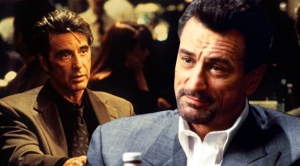 To take a bit of the blame here, I spent way more time trying to figure out what the con was, rather than focus on the relationships. At its heart, this is what makes Heat so powerful. Not just the symbiotic relationship between Neil and Vincent, but all the relationships between the characters. One scene in particular really drove this home. All of the gang got together at a swanky restaurant and brought their significant others as well as a few children. Neil sat at the head of the table, looking around and feeling sorry for himself that he didn’t have someone special to share the night with. But to go to a deeper point, all of these men were in a dangerous profession and in fact, cops were watching their every move as they dined together. There was this impact point when I realized that every single person at that table was about to have their life ruined in some way. It brought to mind the whole idea of choices and at what point our choices become another person’s destiny. So, to that effect, I totally get this movie and it’s importance. But I still don’t like the goatee.

Up next: Taste of Cherry

Quick recap: Set during the Persian Gulf War, a group of military men head out on a rogue mission to find gold.

During the editing stages, David O. Russell attended a fund raiser for George W. Bush at a Warner Brothers executive’s house. Russell walked up to Bush and said, “Hi, I’m editing a film that will question your father’s legacy in Iraq.” Bush shot back, “Well I guess I’m going to have to go back there and finish the job.”

The man sure can dodge a shoe though

My thoughts: War is hell, you guys. Yadda yadda yadda. If you watch Three Kings like I did, though, you’ll become jaded towards all things war. I’ve never considered myself a pacifist but this movie had me questioning all sorts of things- like, what really is the point of war? Is it ever really necessary? And who can we trust to keep things in line? Let me tell you something, an existential crisis was not what I had planned for the holiday break.

Despite the snazzy script and slick cinematography, Three Kings is fairly scathing look the Gulf War. Casting the likes of George Clooney, Ice Cube and Mark Wahlberg makes it seem like this is a buddy heist romp, but it’s actually a complicated story. The beginning of the film, which is set at the end of the war, plays out like I imagined it really did- a bunch of confused but happy 18 year olds quick to pat themselves on the back for a job well done even though they didn’t do much. I was put off by the careless attitudes of the three kings (even though it’s really 4 guys) as they started out on their journey, although I knew that was the point- to show that no one really understood what was going on. By the end of the film, everyone learns a valuable lesson about war being hell and so on but it was frustrating how many lives were lost before that point hit home.

I think my main issue with the movie was George Clooney’s character Archie Gates. He has a Bugs Bunny quality about him- always one step ahead and a scheme to get out of trouble. I think I was supposed to cheer for him and the men but I just couldn’t. I know they did the right thing in the end but there was so much that was wrong to get to that point. It just showed how flawed the system is. And I think what taints this movie more is that 4 years after Three Kings was released, we were back in Iraq dealing with the mess we left. War isn’t just hell. It’s bullshit.

Final review: 2/5. Kept my attention but disagreed with almost everything else.

Quick recap: A director uses the audition process to find an actor for his film as well as a wife. What he gets instead is a big ball of crazy.

Crazy, yes, but also really talented at torture, so points for that

Fun(?) fact: That was totally actress Eihi Shiina’s (Asami’s) throw up given to the prisoner. IMDb says she’s a method actress but I’m going to double down on ‘big ball of crazy’.

My thoughts: As with every Horrorfest, my goal is always to find the movie that scares me most. Being an adult, it’s hard to latch on to anything creepy these days. I’m more likely to freak out about whether I paid a bill on time than if there is a ghost haunting my house. Then again, the other day I walked into my bedroom to find my cat meowing at the wall and it scared me so much I just walked back downstairs. So, where does Audition fall on Mary’s Spectrum of Horrors? I’d say it’s scarier than a wind turbine (seriously, those things are so unnerving) but not as scary as my child silently walking down the stairs with an astronaut helmet on at 6 in the morning.

There were definitely parts of Audition that stuck with me and I thought the film itself was gorgeous, in that ‘someone’s about to get murdered’ way, but I can’t say it was enough to keep my interest for long. I was really surprised by how normal everything seemed in the beginning and I admit to be lulled into a false since of security. But then unnerving information started coming to the surface and soon it was just all out crazy. I don’t want to reveal much because I think that’s the film’s best quality: surprise.

Two elements of the film keep me from giving it a higher rating- the over the top torture, and the explanation as to why the woman turned out the way she did. For some people, these elements are what make the movie so fascinating and scary but personally, it detracted from what I was looking for.

Final review:3/5. Not a strong start to Horrorfest but there are several days left in the month! The search continues. 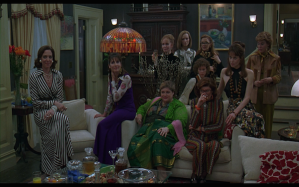 rich or not, everyone made bad clothing choices in 1973.

My husband spent a great deal of the movie angrily confused because he can’t tell Elijah Wood and Tobey Maguire apart. Is this a thing?

My thoughts: Despite my previous snark, in the genre of Rich White People Drama, The Ice Storm is quite good. Watching sad married people can be tiresome after awhile, but the performances in this film made me loathe everyone less than I normally would. It also helps that Ang Lee directed it, which added depth without overkill on the whole ice storm metaphor.

And now to the real star of the film: the ice storm. Being from Texas, I haven’t experienced ice in the way people up north have. Sometimes it accumulates enough that school is canceled but we all know it’s mostly because we needed a break anyway. But this was a legit storm! I don’t know how Ang Lee managed to create something so realistic but it totally worked. I was worried the metaphor might be too heavy handed ,like when you learn in middle school that birds symbolize freedom, but the storm really did tie everything together nicely.

As for the plot, I particularly liked that nothing was really solved. Everyone was just as miserable at the end, but with a new perspective on their miserableness, I think. In a strange way, I wouldn’t say the movie as a whole was depressing. There were sad moments, sure, but everyone just endured through them in the way that people back then did. I won’t give away the ending because I do have some self-control at times, but I imagine that the defining moment ultimately didn’t do much for either family in the end. They carried on as people tend to do, and for some reason, that comforts me.

Up next: City of God