Quick recap: Young Charlie (named before it was cool to call girls Charlie) loves her Uncle Charlie.That is, until she suspects he might be a serial killer. Which he totally is.

Just an uncle and his niece, embracing intimately

Fun (?) fact: The tune Young Charlie gets stuck in her head in the beginning of the film is the ‘Merry Widow Waltz’, a reference to her serial killer uncle. It’s supposed to have been a big clue as to whether or not Uncle Charlie is guilty, but as I’m not so up to date on my waltzes, I missed it. 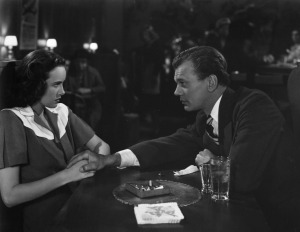 Still Uncle Charlie and Young Charlie. Nothing weird going on at all.

My thoughts: Shadow of a Doubt was directed by Alfred Hitchcock, a fact that at first surprised me and after watching, made perfect sense. Before starting this list, Hitchcock was synonymous with ‘horror’ to me, and I wasn’t entirely impressed by either Psycho or The Birds. But as I have since discovered through Frenzy and North by Northwest, he is also adept at thrillers and I have now learned, Film Noir. Hitchcock has said on several occasions that this was his favorite movie, and it’s pretty easy to see why.

For starters, I think the cast is what really makes this film so enjoyable. Joseph Cotten played the part of Uncle Charlie perfectly, making him a terrifying killer by the end of the movie. Young Charlie (played by Teresa Wright) was also wonderful, with her ability to be naive as well as the most wise in the family. My favorite characters, though, were Young Charlie’s dad and his friend, Herb. The two men had a hobby of coming up with ways to kill each other, which was as disturbing as it was comical.In one scene, Herb asks Charlie’s father if he tasted anything funny in the tea that was served earlier. The father admitted that it did taste funny, to which Herb replied that he had added soda, but it could’ve just as easily been poison. It almost seemed like something David Lynch might do, creating these characters who only talk of gruesome ways to murder the other and still manage to stay good friends.

The one drawback of the film is the actual mystery. It’s clear from the very beginning that Uncle Charlie is a murderer, so it really became more of a question of how he would be caught. The last quarter of the movie dealt with him trying to kill Young Charlie, since she knew too much, which became more comical than it should’ve been. Uncle Charlie was sinister and played his part well, but his constant attempts to murder his niece reminded me of Wil E. Coyote always trying to catch the Roadrunner and instead being outsmarted in some way.

Final review: 4/5. Depending on your perspective, Shadow of a Doubt is a near perfect satire about suburban life (the entire town falls in love with Uncle Charlie, never stopping to question all the weird stuff he does).

Up next: Diary of a Country Priest