Quick recap: In this heartwarming tale, Frankenstein’s monster is lonely and looking for a mate. Given his penchant for murdering practically everyone, it is decided that the best course of action would be to create a female monster made from dead bodies. How romantic!

Fun (?) fact: Elsa Lanchester, who played The Bride, said that the idea of hissing came from some swans she ran across at a park once. Swans are jerks.

My thoughts: Let’s just get this out of the way: the title of this movie is the most misleading of anything I have ever run across. 1) the Bride is never a bride because she never marries Frankenstein 2) Frankenstein is the name of the creator, not the monster, although I’m just about to give up in that area because people just don’t care and finally, 3) The Bride is onscreen for less than 5 minutes, yet the title makes it seem that this was who the entire movie would be about. Lies. Damn lies.

not the happiest portrait of the couple

So, what was I expecting? I don’t know. I guess I was hoping for a little more monster romance. I had it built up in my mind that I would get to see Frankenstein’s monster wooing a grotesque monster like himself and then fall head over heels with her. At some point, he would ask for her hand in marriage and her hand would literally POP off! Pure comedy gold, but alas, that is not what I was treated to. Instead, I had to sit through 80 minutes of everyone hating the monster and running away at the very sight of him. He finally finds a friend in a blind priest, only to be run off again. To make things even more depressing, the monster is given a voice and a few words, which make him seem more like a toddler than murderer. In the final scene, as the monster gets to meet the love of his life, his hopes are dashed when she hisses at him. Literally hisses. Who does that? Realizing the only thing that could possibly love him is instead repulsed by his very existence, he decides to blow the castle up and end it all. 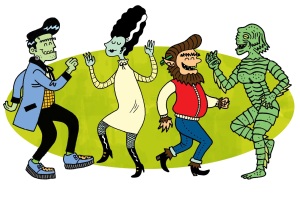 Final review: 2/5. I don’t see what was remotely scary about this movie. It should be relabeled as one of the most depressing films of all time.

Up next: Groundhog Day, because of course.

One response to “#75- the Bride of Frankenstein”