Quick recap: A dancer, Lucky Garnett, moves to New York City in order to raise $25,000 to marry his fiancée. Instead he ends up falling for his dance partner and making a huge mess, although no one seems to care in the end. 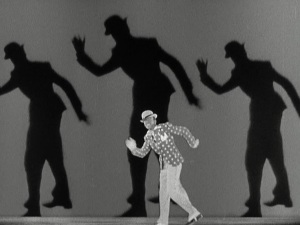 and a little Blackface thrown in for good measure.

Fun (?) fact: During the scene where Lucky sings ‘The Way You Look Tonight’, Penny (played by Ginger Roberts) can be seen washing her hair. After several attempts using egg whites, shampoo and various other ingredients, the director settled on whipped cream since it didn’t run down her face so quickly.

My thoughts: After being pleasantly surprised by Singin’ in the Rain, and maybe swooning a bit over Gene Kelly, I’ve wanted to see something by Fred Astaire. While both are talented beyond measure, it is Astaire who I have always thought of as the classier of the two, more likely to be found waltzing in a ballroom than tap dancing on top of some piano. I’m not sure if that belief still holds true after watching Swing Time, but Astaire is definitely classy.

Swooning may have happened a few times

When people sat down to watch this movie in the 30s, most people weren’t too concerned with the plot. Throughout the course of their career, Astaire and Roberts made a total of 10 films together so I’m not really sure how many scenarios there could possibly be for the two of them to dance and fall in love. At any rate, people came for the dancing and musical numbers. Think of it like porn, the 1936 version. I got a little confused at times as to what exactly was going on because I felt like I was watching an I Love Lucy episode rather than a movie. The chemistry between the two of them felt real, however, and charmed me despite the ridiculousness of it all.

Oh my god, the dancing. THAT is what it is all about. The first time the two of them dance is magical and I could watch it a million times without getting tired. These numbers, especially ‘Never Gonna Dance’ is what I think of when I think of Old Hollywood- ballroom dresses, tuxedos, diamonds. It’s just beautiful. I can’t imagine all the hours and pain the two of them went through to film this, yet they do the dances so effortlessly, like they were taking a stroll. The musical numbers themselves were catchy. Overall, a wonderful experience to see something like this.

Final review: 3/5. If it was just the dancing and singing I would have given it a 5, but the end of the movie is mainly everyone laughing for 10 minutes straight and the whole thing seemed ridiculous. Also, Fred Astaire’s character was kind of a jerk to Penny, in the 30s way of how men treated women.