Thanks for the suggestion, Josh!

Extra fun fact: 90% of  Simpsons episodes are just a parody of The Godfather

Fun (?) fact: The cat held by Marlon Brando in the beginning of the film was just a stray he found on the lot. The cat, being a cat, purred so loudly that some of Brando’s lines weren’t able to be heard. 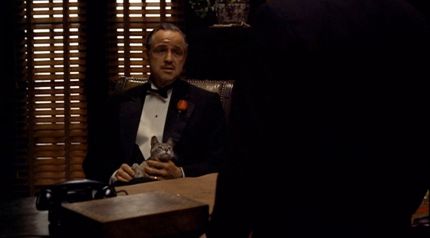 So. The Godfather. There’s so much to love about this film, but I think the genius lies in having all these common family events- a wedding, an ill loved one, a wife getting blown up, a baptism- and portraying them through the eyes of the Mafia. It created this perfect juxtaposition where I, as the viewer could identify with all these scenes and yet also SO NOT identify with any of the scenes. I know people love this movie for all its badass violence (and believe me, there’s plenty of that), but there is also heart, which I found most surprising. The baptism scene is a perfect example of that and also maybe the greatest scene in film,period. On one hand, here is Michael, the new godfather, honoring his duties, and with each phrase the priest says, the other scene is of absolute slaughter. He’s the godfather and he’s also The Godfather. Perfection.

I’m not even going to go into the acting because of course it was superb and all that jazz, but I never really got used to Don Corleone, played by Marlon Brando. I blame two things for this: 1) I’ve seen so many parodies and tributes  of The Godfather that seeing the actual performance felt like a parody itself and 2) I haven’t forgiven Brando yet for One-Eyed Jacks. Nonetheless, it’s one of the greatest roles in film and I can’t imagine anyone else doing it.He too is a juxtaposition between this family man- playing with his grandson, giving his children advice- and also running one of the most dangerous crime syndicates in history. Don Corleone seemed so helpless after getting shot, yet he still managed to influence every decision just by his very presence. It’s one of the greatest roles in film, which I know I’m saying a lot, but come on, it’s The Godfather.

Up next: possibly the Ghostbusters or Casablanca