Quick recap: Three men discuss a recent murder and realize no one’s story can be trusted. 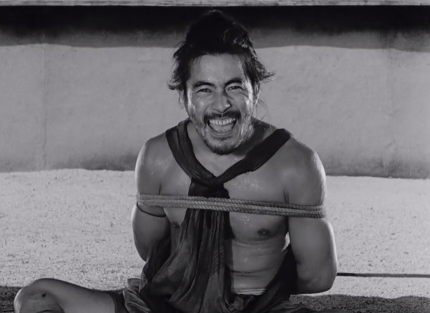 He played unhinged perfectly, especially when he hissed

Fun (?) fact: Director Akira Kurosawa had trouble capturing the rain in the background so he added black ink to the rain machine.

My thoughts: If you look at most modern trials, especially the high profile ones, it’s always extremely hard to prove what really happened. Even with a ton of evidence and a signed confession, that doesn’t always mean the defendant is guilty, or if he is guilty, has a really good lawyer that convinces the jury otherwise. This refusal for anyone to own up to anything makes for good entertainment, although it doesn’t necessarily make for good justice. Rashomon presents a unique case where everyone owns up to a murder, but no one tells the truth about who really did it, proving that things don’t really change. 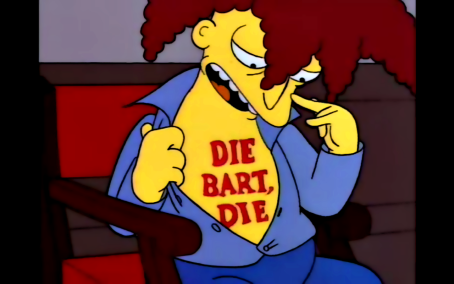 It’s German for ‘The bart, The’

Rashomon is a complicated film, even by today’s standards. The camera work, the frequent flashbacks, the conflicting stories all come together to make something fascinating and beautiful. The main theme (I think) is that human beings naturally suck and shouldn’t be believed or trusted. There’s a murdered man and everyone has his own interests at heart: The bandit, the wife, the murdered man himself, and the Woodcutter who saw it all. All stories are believable until questioned and then the process begins again with a new version. For me, the most complicated issue was the wife who claims she was raped. My initial reaction was that even if she enjoyed it, of course it’s still rape. Not even a question. But the bandit and husband disagreed and were quick to label her a whore, someone who will forever be damaged. It was very frustrating to watch, especially considering the recent conversations about assault that have come up because of the Stanford case. In the end, the Woodcutter settles the discrepancy by saying that yes the woman was raped but she also wanted out of her marriage and this was her escape, no matter how horrible the end result. For a movie made in 1950, it made me consider viewpoints I hadn’t entertained before.

Though I’m still not sure I trust the Woodcutter’s version of events, I appreciate that for all his hypocrisy, he is still a redeemable character. It showed me that although there is plenty of evil in this world, many bad things that happen occur because of selfishness and misguided acts. It’s important to remember that there is good, even when it feels like no one is being honest.

Up next: Pink Flamingos