In a little over a year I have managed to watch another set of 100 movies, a fact that both surprises me and motivates me to keep going. Now that I have 200 down, my eventual goal of watching 1001 movies seems more feasible. Before I set off on my next 100, I wanted to stop and recap a few memorable movies I have watched and what they have meant to me (good and bad):

Most likely to make my cats run off on account of my singing along:

The Sound of Music

Movie most likely to invoke the Baader-Meinhof Phenomenon:

(but seriously, references to this film are EVERYWHERE)

Movie that signaled the end of an era:

Orphans of the Storm

Movie that did nothing to help with my new found Robert Redford love:

Singin’ in the Rain

Movie with most ‘WTF?’ moments:

The Ballad of Narayama

(yet much more enjoyable than The Tin Drum)

Shadow of a Doubt

Movie I’m most likely going to recommend when someone asks:

Movie with biggest Mother issues (this was a tight race):

And there you have it, folks! I have no idea what is in store for me, for my next 100 but at least I’m done with DW Griffith! 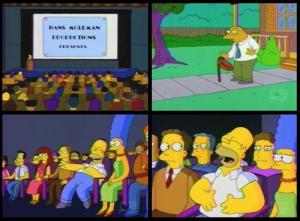