Quick recap: A singing nun takes on the role of governess for 7 children and teaches their widower father about love. 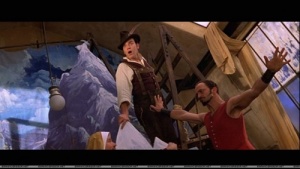 The hills are ablaze with the euphonious symphonies of descant

My thoughts: Oh, Sound of Music. I fell in love with this movie as a kid after my music teacher showed it to us in its entirety. I have since seen many more ( sometimes better) musicals as an adult, but this one still holds a special place in my heart. Since I am familiar with this movie, watching it again for the list was more about whether it holds up as much as it did when I was little rather than if it is actually a ‘good’ movie.

When I told my husband that I was going to be watching The Sound of Music, he scoffed at how schmaltzy it is. This is coming from someone whose favorite Christmas movie is It’s a Wonderful Life, but that’s for another post.Anyway, while watching it, I could definitely see some schmaltziness, but it just didn’t bother me like I feared it would now that I am a jaded, cynical adult. Like, for instance, how quickly the children latch on to Maria when they are known to have driven several governesses away, including one that only lasted a couple of hours. She’s just someone that you can’t help but want to do good by, though. And Julie Andrews was made for this role. The kids can be eye rollingly cute at times but it is her that completely makes this movie into something wonderful.

Above all things, I love The Sound of Music for, what else, the music. I love every single song and was pleasantly surprised by how many of the lyrics I remembered ( the cats were not impressed with my singing, by the way, especially one who bit me throughout the movie). Edelweiss is still my favorite because of its simplicity and yet all the complicated things it stood for. For a kid just getting acquainted to the ‘adult’ world, this movie was a perfect bridge between childhood and adolescence. It was the first time I really understood the Nazi regime and how terrible everything was, and yet there was a happy ending so that I could still have hope. It may be schmaltzy, but it’s my kind of schmaltzy.

Up next: All that Jazz