Quick recap: A train robber, bounty hunter and really bad guy are in a race to find buried treasure.

He may be bad, but oh my god is he gorgeous!

Fun (?) fact: Although the movie is somewhat of an homage to spaghetti westerns, it more closely resembles a genre of Korean films called  a’Manchurian western’. 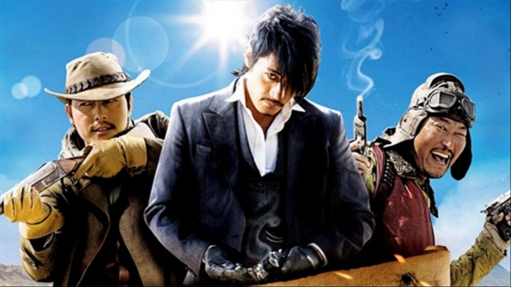 My thoughts: Seeing as how The Good, The Bad and The Ugly is one of the best films I have watched lately, I was really interested to watch this one. I expected it to be somewhat of a parody with nods to the original version, but it’s really not. The two movies have a similar structure and plot, but, and I know this is blasphemy to some, I enjoyed this one so much more.

My favorite aspect of this movie is how complex the characters are. The Good guy isn’t all good, while the Bad guy is bad, but with reason to be. And The weird guy is funny and klutzy but also amazingly savage when needed. And these traits are seen mostly through the actions of the characters because there isn’t a ton of talking. There is a ton of violence in this movie which I loved watching because there is great mix of guns and martial arts. There were some ridiculous moments, but I think that is in line with the genres this movie was paying tribute to.

The Good, The Bad, The Weird is set in 1930s Manchuria but there is beautiful mix of modern elements as well as elements from the Wild West. The music is also amazing and blends everything together perfectly. Basically, I loved this movie from beginning to end and I’m a little disappointed more people don’t know about it. It’s kind of like the Amelie phenomenon, where that’s the only French film many people know so it automatically becomes their favorite. For Korean films, I think many people could identify The Host, but this one deserves just as much credit.